As I’m now doing some trials on giving studio-photography workshops here in Dubai, I realized I need some more online-material to support it. So here’s my take on “the most commonly used studio photography lighting patterns”.

Doing studio photography can be a rewarding thing, having control over all the lighting and everything, but at the same time it can be intimidating for a less experienced strobist. Thankfully the wheel doesn’t have to be invented again, but instead there are existing reusable lighting-patterns that can be leveraged to get the results you want. Good, nice-looking photos can be achieved by just trial and error, but you only start developing as a photographer once you start making conscious choices and thinking why are you doing something and then thinking what to adjust, if the first attempt wasn’t exactly what you were looking for.

Again, photography is not an exact science but a creative field where rules are made to be broken - as long as you more less know what you’re doing. So take these as good starting points and play around them as you go. You might learn to become a better photographer in the process!

Split lighting is generally regarded as a bit more masculine setup, but nothing prevents you from using it for women as well. The idea is to light the face from one side so that the other is in the shadow. 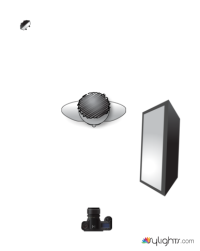 In the example photo there is a 60x90cm softbox placed right to the camera, roughly at eye-level of the subject and there’s a white wall functioning as a reflector to fill some of the shadows on the left side. A bare flash is being used as a kicker-light behind the subject to the top left corner of the frame. The wall behind our subject is actually white, but as the main light is barely hitting it the wall appears grey for that all-business look we were after.

As a side-note, if you pay a lot attention to the background you’ll notice that there’s a slight gradient that is sort of opposite to the light hitting to our subject, ie. the light is brighter to the left. This is because the main light is pointing to the left and only “the edge” of the light is hitting to the right-side of the frame and more of it is heading to the left. So if you make this effect stronger by controlling it even more you can make the end-result more dramatic and make do with just light and skipping the kicker-light altogether.

The Rembrandt lighting is named after a Dutch painter. This lighting technique is something between split-lighting and loop-lighting. 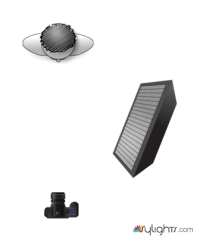 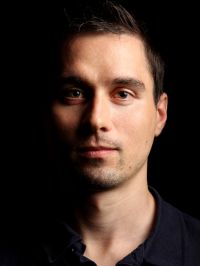 Like the split-lighting this is quite a dramatic look. The signature of this technique is the triangle it produces on the cheek further away from the key-light. This technique doesn’t necessarily work on every face, depending on the shape of the nose etc.

Loop lighting is a quite safe setup to be used with practically anyone, regardless of gender or age. If in doubt, just use this. The name comes from the tiny “loop” shadow that is caused by the nose. This is achieved by placing the light slightly above the eye-level, 45 degrees off the camera on either side. So the difference to the split lighting is that the key-light is illuminating the whole face, so even though the nose is casting a small shadow here, the face is relatively evenly lit.

Butterfly lighting (aka the Paramount lighting)

The name “butterfly lighting” comes from the tiny little symmetrical butterfly-shaped shadow cast under the nose. The alternative name, “Paramount lighting” originates from the glamour hollywood-shots from the past. 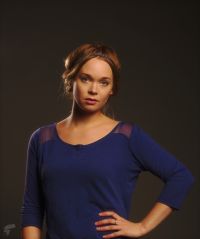 This lighting is achieved by placing the light slightly above but pointing directly to subject’s face, preferably tilted slightly downwards. This dramatically emphasizes cheekbones and usually generates a flattering look. Usually works much better on women than on men.

Compared to loop lighting the magic word is “symmetry” and also the key-light is placed higher. If you add some fill below this lighting pattern becomes what is known as “the clamshell lighting”.

In the example photo there’s also a kicker-light bringing some highlights from the top left behind the model separating our subject from the background.

Some additional points to keep in mind

Focus on the eyes. Usually in studio-work you want to have lots of depth of field for maximum sharpness and as you have control over the background you don’t need to blur it out. Still, if at least one eye is not in tack-sharp focus, the resulting image will usually look bad. Again, unless it’s for artistic purposes.

As for camera settings you usually put the aperture of your lens to somewhere around f/5.6 for maximum sharpness, ISO to 100 for minimum grain/noise and shutter-speed somewhere around 1/160s for eliminating all the ambient light. A good lens-choice for portrait work is usually something with focal-lengts between 50-135mm, so a short telephoto is a must. Using anything wider can cause some distortion, like exaggerated nose etc and going longer than this usually takes too much space, as you’d have to walk far away from the subject for the same framing. My go-to lens at the moment for portraiture-work is my Zeiss Batis 85mm f/1.8.

On this blog-post I have been repeating some terms that are common when talking about lighting. Lets recap a little:

Lighting gear I currently use

This section will probably eventually become an independent blog-article, but for now I’ll have it here, as people on my workshops always asks about the gear.

In terms of camera and lens, studio photography can be done with pretty much any camera and a lens with suitable focal-length as long as you can trigger the flashes. We’re not looking for a low-light monster sensor with high ISO capabilities as we’re most likely to shoot at ISO 100. Same goes with the lenses: we simply don’t need a bright aperture optics as we’re probably not going to shoot wide open even with an f/4 lens. Also even 12 megapixels is plenty.

Godox 60cm x 60cm Softbox: Portable, affordable and quick to set-up. Comes with a handy carry-bag and a bracket for attaching a speedlite flash. Does not come with a light stand, but I’ve also seen these sold as a kit with one on camera gear shops, so it might be worth having a look at one of those.

Godox 60xm x 90cm Softbox with a grid: A bigger softbox that also comes with a grid for more control of the light, a carry-bag and the bracket. Not as portable as the smaller one above, but also a pain to setup until you’ve had enough practice. I would recommend this due to it’s affordable price, but only if you don’t have to take it on-location that often.

5 in 1 collapsible light reflector disc: In so many cases instead of buying a second flash unit, just use an affordable reflector instead for fill etc. Easy to carry around and can be used outdoors even without any flash to direct the sunlight.

A light-weight portable light-stand: Although these are not the best quality, but you should own at least one of these portable, easy-to-set-up light-stands. Please note, that at least this specific model in question doesn’t come with a carry-bag. Be prepared to have some make-shift sandbags to hold these upright on windy situations - I use my camera-bag as a weight.

Phottix Saldo 395 studio boom light stand: honestly, you’re not going to take this to just any location, it’s just simply too big and heavy. But having one of these at your “studio” gives you lots of legroom and versatility in terms of positioning the lights. This can house quite a heavy flash-units and light-modifiers as long as you use the provided sandbag with some counter-weight. I usually use water bottles.

Godox XPRO triggers for Godox lighting system: Remotes for Godox X-system. Can control up to 5 groups of flashes (I think one group can have up to 15 flashes, so not gonna run out here). Any XPRO transmitter can control any x-system compatible flash regardless which camera make they are made for, but make sure you pick the one compatible to your camera system to make it work on the hotshoe your camera has:

There are a cheaper alternative as well, but they are ergonomically so horrible that I would really only recommend them if you’re really tight on the money. They do, however, have one feature that the more expensive ones don’t: a hotshoe, so you can technically stack another flash or transmitter on top of it.

Godox TT685 TTL HSS flash is quite affordable speedlite. Runs on four AA-batteries but also supports external battery-packs. Has all the bells and whistles you could imagine a speedlite can have, even up to a point where it’s not exactly the easiest thing to use as this one can be even used as the transmitter to control other flash units.

Neither the transmitters nor the above flash units come with batteries and the choice of battery is actually more important that you’d first think. If you pick cheap low quality batteries you both end up with longer recycle-times, shorter battery-life but also end up spending more money as you might have to charge the batteries more often. I only buy Panasonic Eneloop Pro batteries and this charger is also excellent (can even charge one battery at the time). This charger has individual charging indicator LEDs that also tell you once the life-cycle of a battery is ended.

Godox AD200 TTL HSS pocket strobe flashlight: this is probably the weirdest little flashlight ever manufactured, but it comes with some twists. First of all, it’s a battery powered flash that is relatively small, but yet powerful - 200Ws of power to be precise.

These are highly modular and come with both freshnel head and a bulb head, former which also provides a modeling light. Personally I prefer the bulb one as it has better distribution of light especially when placed inside a softbox etc. Speaking of modularity you can also attach two of these on a Godox AD-B2 bracket and get twice the amount of power from single light source plus get 2x10W LED modeling lights with them. You can also purchase a round head or an extension cable so that you can place the comparably heavy power unit away from the light stand itself - or even use the power unit as a counter-weight. Having two of these and the AD-B2 part you’ll have the option to use either two separate flashes or one twice as powerful one. Of course, these are way more expensive than the basic speedlites. Also note that these require a wireless remote trigger (like the XPRO or X1N ones mentioned above) to fire as they are not equipped with any hotshoe connectors.

Ps. special thanks to my friends Ben (who borrowed his face for Rembrand lighting example) and Valeria (who snapped that very photo).