Shot in the dark

I haven’t had any time to write in a very long time, but lets get a few photos out along with a couple of lines now. For a while I’ve wanted to try to shoot after dark using artificial light as the main light source mixed with an urban background producing bokeh from street-lights and such. It’s not exactly the simplest task, since heavily overpowering the ambient light after dark using even the cheapest little strobe is too easy. My plan was to use a biggish softbox to both make the artificial light as subtle as possible but also limit the amount of light hitting our model Laleh so that she doesn’t look like she was glued on top of the background.

So we arrived to our location before sunset and took a few shots in the ambient light and below is also one of them. The breakwater we stood on was a bit narrow so I had to resort to my 35mm prime for a bit wider angle, which has the advantage of including more of the background. The iconic Dubaite backdrop consisting of the (currently) tallest skyscraper of the world, the Burj Khalifa, really makes this spot a worthy location for a photoshoot. However, the lights coming from the bustling metropolis after sunset makes the scenery really come to life.

After the sun had set it was time to grab the lighting gear out, but we had a problem. The wind was so bad that I couldn’t even assemble my softbox, let a lone put it on a light-stand. It was so dark on this island that I couldn’t see Laleh’s face through the viewfinder, having metered for the city-lights at the background, so using any ambien light wasn’t an option. I decided to place the bare Godox TT685S strobe on top of the light-stand, put it to the minimum power at it’s widest angle and tried to place it so that the light falls off to compensate what was still a massive amount of power. I screwed the 85mm Zeiss Batis on my camera, put it on the manual mode with auto-ISO and tried to keep the shutter-speed as slow as possible to minimize the ISO. The result could’ve easily resembled more of a deer-in-the-headlights but we managed to pull it off just nicely.

Or to be honest, I think we nailed it! 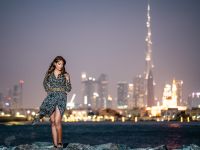