As I came to Finland for my summer holiday and as it is possible to actually shoot outdoors here during the summer I thought maybe I should just do that. Just within a couple of hours of that thought Jasmin, who I’ve shot once before, commented one of my random, non-related Facebook posts and I decided to ask her if she has time and interest to shoot again. And off we went, to the nature of Kirkkonummi, southern Finland.

Original idea was a not-so-original-idea of shooting in a middle of a cornfield or such, but we ended up nowhere near such a location. Instead we went by a small lake in Kirkkonummi, where Jasmin had earlier found an abandoned swing, made of car tire. I asked her to take her headphones as props and took a few shots on this swing. Also as the setting sun was shining nicely from a lowish angle we took some shots on a rock by the beach. Colors turned out to be very nice and warm.

When we had finished and Jasmin drove me to the train-station we saw my train just departing and as we had another half an hour we went to a nearby motorway-fence and took a few snaps there as well. 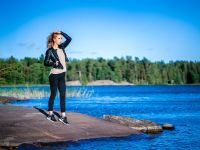 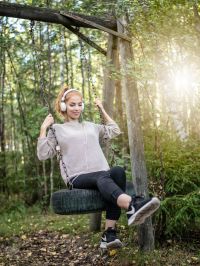 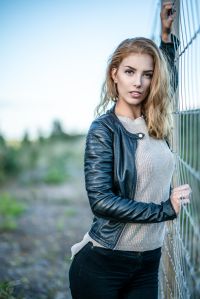